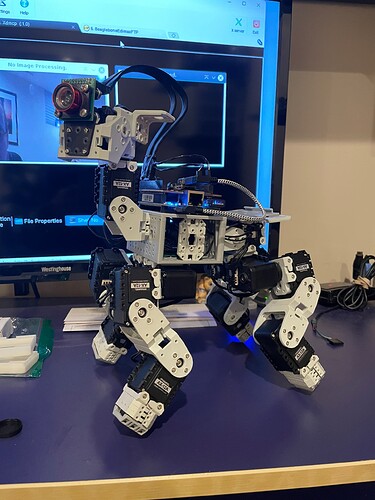 PupBot1920×2560 331 KB
Don’t know if Robotis will cry foul, but if nothing else I at least want to use this opportunity to ask Robotis to get more serious about their controllers! Their servos are great! Second to none! But their controllers never seem to take advantage of all the great cheap computing power we now have, or at least make them integrate-able. That is why I created the Pup-bot Advanced! Using their Bioloid Comprehensive kit, I designed and 3D printed mounts for a powerful SBC (Beaglebone Black in this case) and an inexpensive camera (OV7675). I also used source design for their servo bus arbitration and created a ‘cape’ for the Beaglebone that allows it to control the servos from one of its two powerful integrated co-processors (PRUs). The result is a system that can control the robot servos, read input from a camera, and still run a desktop OS that can be used to get the robot to do all kinds of smart things! And it all can be run from a LiPo battery (not shown here).

Just remembered to put the link to the repo for the software I wrote for it:

Nicely done!
Was the BBB fast enough to track a moving target via the use of the PRU?