Just found a strange problem with OpenCM-904 in Arduino mode:

I implemented the approach of assigning a fake Product Number and the default ID=200 in order to fake out TASK 3 - Debug Tool into thinking that it is talking to a real CM controller did not work out for my setup. The program did compile and... 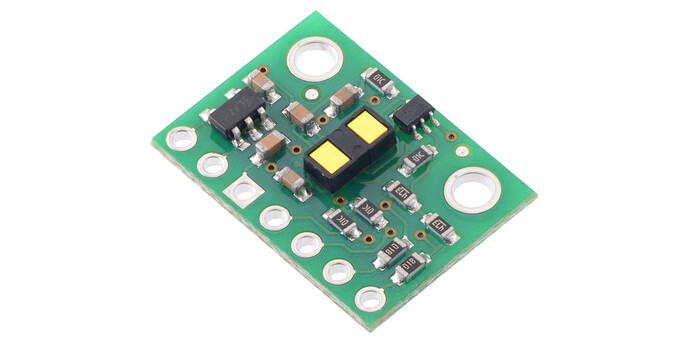 This sensor is a carrier/breakout board for ST’s VL53L1X laser-ranging sensor, which offers fast and accurate ranging up to 4 m. It uses the time of flight (ToF) of invisible, eye-safe laser pulses to measure absolute distances independent of...

However, I have found that I cannot use both features AT THE SAME TIME, because the I2C port/sensors somehow would disable access to Serial2. Only the I2C sensors worked properly in this situation, although in theory these are two independent Arduino services.

I use an Arduino MKR ZERO and have set up 3 VL53L1X from Pololu via the default I2C pins and Pins D3, D4, and D5. I also set up a BT receiver via UART Serial2 using Pins D0 and D1 (SERCOM3) as per instructions from Arduino...

Has anyone encountered this issue? I would be very surprised to know that no one has tried to use BT via Serial2 and to interface an I2C sensor at the same time on the OpenCM-904 after all these years! So maybe I have missed something very fundamental some where?

Well…not really familiar with your case,

if you are using wiring.h for I2C, this may implement software I2C (Found at here) which might be a cause. For Hardware I2C, use i2Cdev.h

The code was from Pololu and it used the following #include statements:
#include <Wire.h>
#include <VL53L1X.h> // Pololu Library

Via the conversations on the Arduino Forum, I have figured out the “problem”, see this post

@Koepel , @MartinL Thanks for offering different troubleshooting ideas, that helps me look for more work-around ideas and I think that I have found the "problem", although not the "solution" yet. As I have used successfully the CL53L5CX on the mini...

But I don’t know if Pololu’s help/solution is forthcoming or not. I am going to try a BLE SPI module from Adafruit instead to see if I can work around this issue.

@Tech_Support
I had found a work-around using the BLE SPI module from Adafruit for my MKR ZERO, for more details see my Pololu post

@PatrickM Some more updates. Instead of using Method sensor.read(), I had tried to use sensor.readSingle() instead, but my Serial2 code was still being blocked (see Line 86 in picture below). I even commented out sensor.startContinuous(54) (as...

Unfortunately, I had found the Adafruit BLE SPI not to be compatible with OpenCM-904, so I’ll be staying with DMS-80 sensors and BT-210/410 for my OpenCM-904 projects from now on.

@Tech_Support
Thanks to a tip from Pololu, I figured out a second way (a non-blocking way) that resolved all my issues on a MKR ZERO. See this post

Thanks to a tip from Patrick of Pololu, I have figured out a second solution that uses this sensor in a non-blocking way. See picture below: Basically, check first if new data is ready with Line 85, then do a non-blocking read(false) with Line...

This solution also worked on the OpenCM-904.

The main conclusion is that if ToF sensors such as Pololu VL53L1X are used with the OpenCM-904 in Arduino mode, they will have to be read in “non-blocking” mode, so that the Serial2 Port remains functional