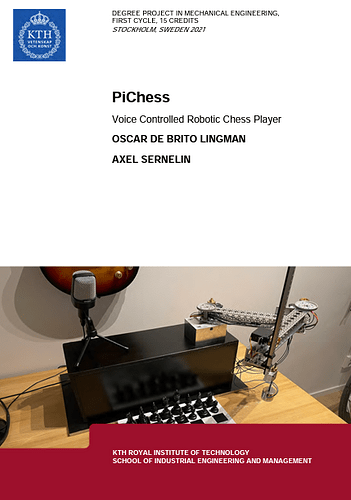 Abstract: The purpose of this bachelor’s thesis was to create a
robot that could play chess through voice recognition and
robotics. The two areas to be investigated were the robot’s
precision and speed. The reason for building a robot arm
of the SCARA type was that it can easily pick up and
place pieces with reach over the entire chessboard. The
robot arm is controlled from a Raspberry Pi 4 and is moved
by two Dynamixel AX-12a servomotors. To pick up chess
pieces, a continuous 360-degree servomotor was used to lift
an electromagnet which was mounted on a gear rack. A
USB microphone was used to collect what move the player
indicated. The Stockfish chess engine was used to generate
moves for the robot.
The parts of the robot that had the greatest impact
on precision were the stability of the aluminum profiles,
the gear ratio between the gears that transmit torque to
the arm, the gear mesh contact ratio and the size of the
electromagnet. The time it took to complete a move could
be reduced by increasing the speed of the motors when
a chess piece was not attached to the electromagnet, and
using a larger gear in the RC servo that raises and lowers
the electromagnet.